The music didn't last long, Turkish President Erdogan didn't please the Kremlin for long by blocking Finland and Sweden from joining NATO. Having achieved everything he wanted from Helsinki and Stockholm, the Turkish leader gallantly stepped aside. Masterfully using Moscow's actions to its advantage,

Did Ankara win a landslide political victory? True 100%. By failing to keep Erdogan's veto in its former place, has Russia suffered a political defeat? This is which side to look at. 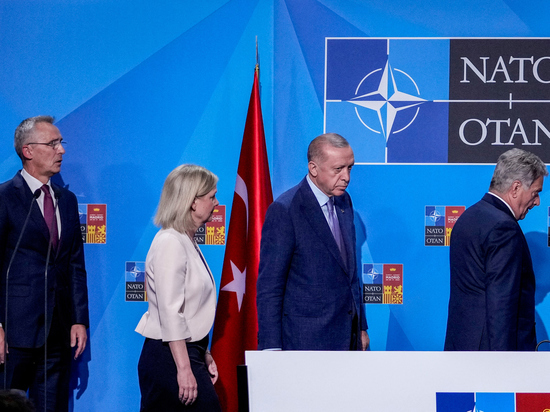 If we proceed from the premise that Turkey did not let the Finns and Swedes into the North Atlantic Alliance out of the goodness of their hearts – based on the desire to please Moscow, then yes, there is a strategic defeat.< /p>

But I'm even curious: is there at least one such simpleton in the political circles of our capital? If there is, then here is another piece of news that will allow him to get rid of his “last illusions”: as Zelensky’s Defense Minister Alexei Reznikov said, Kyiv and Ankara are going to build a plant on Ukrainian territory where Turkish Bayraktar drones will be produced.

If initially there was no chance of winning, then you should not talk about defeat. Instead, it is worth talking about how many political, economic and image dividends Turkey has managed to earn from the Ukrainian conflict.

One of the main concerns of Erdogan (and all his predecessors and, I suspect, all his successors) is the fight against Kurdish separatist groups. Until February 24, 2022, it was unthinkable that Turkey could force Finland and Sweden to commit to helping her in this fight. Where Erdogan saw “villains and terrorists”, Finns and Swedes saw “persons subjected to political persecution” who should be granted asylum.

But remember what old Archimedes said: “Give me a foothold, and I will move the Earth!” By launching a special military operation in Ukraine, Russia gave Turkey such a foothold. In Finland and Sweden, they wanted so badly to hide under the NATO defense umbrella that they suddenly “wiped their glasses and began to see clearly”: they say, where have we seen “freedom fighters” before? They are terrorists, real terrorists!

Cynical than that? First, how it happens. And secondly, in the “language” spoken by politicians all over the world, the word “cynicism” is just another synonym for the word “pragmatism”.

Erdogan approached the issue of Finland and Sweden joining NATO with the utmost pragmatism. And here's what's really important now: Can the Kremlin be able to do the same? Recently, I rarely get aesthetic (as well as political and any other) pleasure from Dmitry Medvedev's public speeches. In blissful times, when Dmitry Anatolyevich was president, this happened, I will not deny it. But in the rank of Putin's deputy in the Security Council, Medvedev, for my taste, is too generous with expressions like “some regular idiot, a former minister from Latvia”, “Pindostan political pygmies (non-Pelevin)”, “bastards and degenerates”.< /p>

However, there are exceptions to every rule. Sometimes the former president of the Russian Federation still behaves like a responsible statesman capable of sending important political signals. And such a signal was sounded in an interview published even before Erdogan's “surrender” by the Deputy Chairman of the Security Council to “Arguments and Facts”: “The accession of Sweden and Finland to NATO does not threaten us with anything particularly new. These countries previously had relations with Russia that can be called quite respectful and mutually benevolent. Although in the past, of course, different things happened. Now we do not have and are not expected to have territorial disputes with these countries, and even reasons for them. If they feel better and calmer by joining an alliance, good luck. NATO is already next to our country, without Sweden and Finland.

Of course, as is customary in politics, having given the offenders a “carrot”, Medvedev immediately “clicked the whip”: “In the event of such an expansion of NATO, the length of its land borders with Russia will more than double. We will have to strengthen these lines. The non-nuclear status of the Baltic will become a thing of the past, and the grouping of ground forces and the navy in the northern directions will be seriously increased. No one is happy about this, and neither are the citizens of the two NATO candidate countries.”

There really is no “delight” – here Dmitry Anatolyevich is right again. But there is no horror either. It was during Medvedev's presidency that “the disappearance of the non-nuclear status of the Baltic States” could be perceived as a painful political drama. Against the backdrop of what is happening ten years after the end of this presidency, sadness over this seems somehow out of place.

What general conclusion can be drawn from all this? Probably like this: Russian politicians and diplomats should perhaps learn from Erdogan the art of winning. For some reason, he has been constantly succeeding in this lately – moreover, effortlessly, without much effort. Interesting: maybe someone knows why?

Fake smiles at the NATO summit: Erdogan, Biden, Macron and others