No sooner had Kherson’s special services prevented a terrorist attack in the Stagecoach hotel than the sabotage was committed in another place and by the hands of other people, but supporters of the same Kyiv mode. This morning the city was awakened by a loud explosion. On one of the streets, a man got into a parked car, which exploded. The authorities assessed this as a targeted terrorist attack against specific individuals, because the deceased worked in the Military Civil Administration as the director of the youth policy and sports department. His name was Dmitry Savluchenko, he adhered to pro-Russian views. 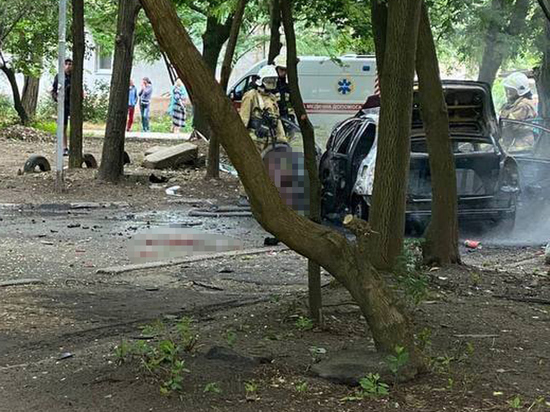 Against the background of the mass surrender of the Armed Forces of Ukraine as a prisoner near Lisichansk, Kyiv decided to strengthen sabotage methods of influence. According to media reports, once the deceased Savluchenko was a member of Viktor Medvedchuk's Opposition Platform – For Life party. According to Kirill Stremousov, deputy head of the Kherson Regional State Administration, the deceased was 36 years old, he had a fiancee, and soon they were to get married.

“They did this because he is my employee, again they sent me a bunch of threats that I was next,” Stremousov said. Savluchenko was not involved in politics, did not make statements, was engaged in paperwork, and resolved issues of helping children. His mother was the first on the scene, she tried to pull her son out of the burning car, put out the fire. According to her, eyewitnesses of the incident did not respond to her requests to call an ambulance.

Another terrorist attack was averted the other day. One of the criminals was captured. It turned out that this was the staff sergeant of the Armed Forces of Ukraine Alexander Timko. According to him, he was supposed to mine the Stagecoach hotel, but refused to do it when he found out that visitors from other regions of Ukraine, and not soldiers of the RF Armed Forces, lived in it.

The strength of this morning's explosion was 300 grams in TNT equivalent. Undermining cars is a favorite tactic of Ukrainian saboteurs, which they repeatedly resorted to in the same Kherson.

In June, unidentified persons blew up the car of the head of the Kherson Federal Penitentiary Service Yevgeny Sobolev. The head of Chernobaevka, Kherson region, Yury Turulev, found himself in a similar situation. Unidentified persons blew up his car with a landmine when he was leaving for work. Both Sobolev and Turulev received shrapnel wounds, but survived. At the same time, the Kyiv authorities are not at all embarrassed by their terrorist ideology, but are even proud of it and gladly take responsibility for what they have done.

A collage with photos of employees of the Kherson military-civilian administration appeared on the nationalist Telegram channels. Dmitry Savluchenko is crossed out on it with a cross. “Are the others ready?” – the inscription under the photographs threatens.

Here is what the My Kherson channel reports about the terrorists: by increasing the number of terrorist attacks. Also, the SBU and secret agents were given carte blanche to undermine urban communications and other infrastructure in order to complicate life in these cities and regions.”

special service veteran Alexander Mikhailov told Moskovsky Komsomolets about how to protect yourself from saboteurs.

“Sabotage is part of any military conflict,” Mikhailov believes, “But if front, the danger is obvious, then explosions in the rear are terrorism. It is often unaddressed … And the more victims, the more the enemy is proud. The establishment of a peaceful life is always accompanied by such savagery.

– There is only one countermeasure – the strengthening of the counterintelligence regime based on civilians. But it must be borne in mind that citizens are also heterogeneous. Many do not accept the new order. This is what terrorists rely on. The topic is not easy and very long. In the Second World War, SMERSH was created to combat this, which, together with the NKVD, put things in order. I think we will come to this.

“But you won’t do anything. Again, a tough counter-intelligence regime is needed, which involves a wide range, including checking the roads along which people move and identifying terrorists. The car must be guarded at the parking lot, the road along which it travels must be cleared, it must be accompanied.

Representatives of the CAA have a bodyguard that accompanies them. Everything that is necessary is done, professionals who know everything perfectly well work here. We encountered this in the Chechen Republic, representatives of the VGA were also killed there. And terrorist attacks have always been on the roads. Where only land mines were not tied. Even to the tops of the trees, so that there is a greater degree of damage

“We blew up police cars on the territory of the internal affairs bodies. The car is a vulnerable target. You can lay a landmine on the highway, put it into action using a radio signal. This is not a matter of physical protection, it is a matter of counter-terrorist activities, but, unfortunately, you cannot block everything. Moreover, partisan activity with the support of the civilian population creates a difficult operational situation.

As for SMERSH, the Kherson authorities announced plans to create it back in March. True, it was then about the informational SMERSH, which was supposed to identify instigators and provocateurs inciting mass anti-Russian protests.

And shortly before that, another pro-Russian activist, Pavel Slobodchikov, was shot in his own car with a control shot. “There is a purposeful task going on – to intimidate and destroy everyone who is building a non-Maidan form of society,” Kirill Stremousov, chairman of the rescue committee “For Peace and Order” at that time, told Moskovsky Komsomolets after that.