Specialists of the Combined Arms Academy of the Russian Armed Forces have developed a project for an amphibious buggy — a six-wheeled all-terrain vehicle designed to move over difficult terrain, including water, and to fight as part of tactical groups. The machine is characterized by high mobility, low visibility and good maneuverability.

Military scientists justify the feasibility of creating such a buggy, referring to the difficulties of using existing models of such equipment in combat. Due to its large dimensions, it is noticeable to the enemy, it cannot be delivered by helicopter.

With an average speed of  all-terrain vehicles currently in service with the Russian army of 90 km/h during during the battle, this vehicle will have to constantly go to "peak capabilities", and this will affect both the resource of its units and assemblies, and on low fuel economy, which will lead to a reduction in the range of the platform.

Insufficient mobility coupled with low-speed maneuvering increase the risk of destruction. In addition, with a single entry, the personnel, upon detection of this vehicle, will not have time to dismount or leave the vehicle and will be destroyed. 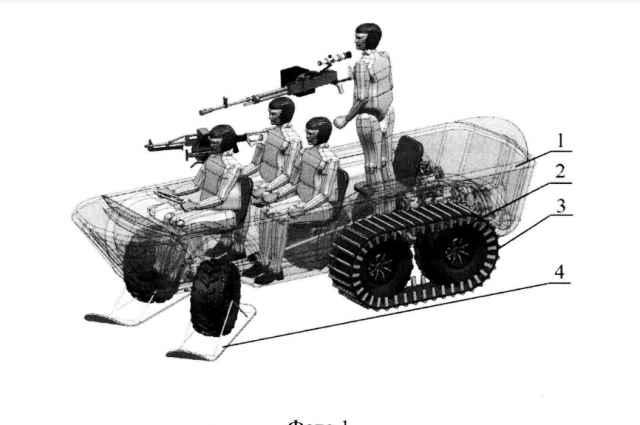 The new buggy will be distinguished by lower specific pressure on support base (snow), increased cross-country ability and water flow, and selected and engine-transmission arrangement with chassis will give a gain in speed, handling and power reserve. The selected and calculated motor-transmission layout with the chassis will help to increase the speed.

The use of an all-terrain vehicle platform should increase the mobility of tactical military formations by increasing the maneuverability of the equipment used when performing combat missions.

Overall dimensions are about 4 meters in length and half round in width. This all-terrain vehicle platform is intended for use by tactical military formations of the Armed Forces of the Russian Federation in various weather and climatic conditions with installed weapons and firing from  In depending on season and weather-climatic conditions, the MVTP is equipped with appropriate support-running modules.

Weight is 1.2 tons, speed — 120 kilometers per hour on land and 12 kilometers per hour on water. A submersible inlet propeller is provided in the rear part of the machine body, and the wheels are made with the possibility of installing caterpillars on them for movement in spring mud and mud or skis — in the snow.

The vehicle is designed to transport four people in full combat gear, it is possible to install two machine guns, one of which is large-caliber.