The intrigue about who will succeed Boris Johnson as British Prime Minister is growing. After the dropout arranged by the Tory parliamentarians, only two candidates remained – Rishi Sunak and Liz Truss. Polls favor the Truss when all members of the Conservative Party vote in the last round. 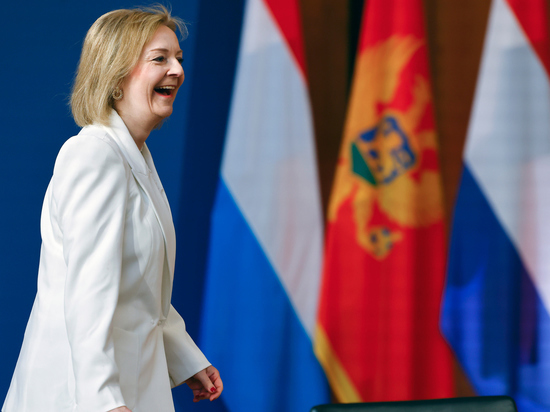 The assertiveness, even cheekiness of Liz Truss in the struggle for power has already manifested itself with might and main. Until the very last round of voting, the head of the British Foreign Office, who was in third place, managed to utterly smash the – and throw out of the competition – second-best candidate for ex-secretary of defense Penny Mordont (her supporters blame Truss for having a hand in the media's bitter attacks on the loser).

As a result, former Chancellor of the Exchequer Rishi Sunak emerged as the leader from the last round of voting, gaining 137 votes of Conservative MPs, Truss managed to enlist the support of 113 parliamentarians, beating Mordaunt with her 105 votes.

“Thank you for trusting me. I am ready to get down to business from the first day, – handing out advances like it's in the bag, Truss. And I must say that many observers also believe that its success is guaranteed.

And yet, on the way to victory, both she and Sunak will have to compete for the votes of approximately 160,000 ordinary members of the Conservative Party before a new party leader and the next British Prime Minister are announced in early September.

The task facing the finalists (and even the eventual winner of the race) is no small feat as the UK faces a painful cost-of-living crisis and the Conservative Party wanes after 12 years in power. And once a new leader comes to power, the opposition Labor Party will take every opportunity to remind him that he (or she) was part of Boris Johnson's government.

So, Rishi Sunak seems to be formally in the lead. But Liz Truss has already shown Penny Mordont, who is in the losers, her ability to seize the initiative. In addition, now the composition of voting conservatives is expanding. And here for the “new Margaret Thatcher”, as the ambitious Liz Truss positions herself, a spacious field of opportunities opens up. not only Truss, but even the out-of-race Mordaunt and Kemi Bardenok. As for the head of the Foreign Ministry, she did not waste any time, gradually creating a broad base of support both among members of parliament and among the broad masses of conservatives.

But back in the fall of 2021, according to a YouGov poll, Liz Truss took the penultimate place in terms of fame and popularity in the list of 20 conservative politicians. Now she claims – and with a good chance to win – for the role of prime minister.

As the Financial Times notes, speaking of the incredible rise of a little-known functionary for several more years, “Boris Johnson appointed the 46-year-old Truss to one of the four main government posts in the UK only in September last year, but she passed through the musty corridors of the Foreign Office on King Charles Street, embarked on a fast-paced world tour and wowed foreign diplomats with her blunt style.

Talks about her replacing the chaotic Johnson as prime minister no longer sound fantastic. During 2021, she proved to be the most popular cabinet minister among the Conservative activists, who will eventually choose Johnson's successor.

One of the “Achilles' heels” rival Truss Sunak is said to be strongly associated with Boris Johnson (although it was he who “betrayed” his boss, launching a series of resignations with his loud departure that led to the end of the Johnson era).

However, it is also not easy for Liz Truss to avoid linking her name with the outgoing head of government. After all, she is still the Minister for Foreign Affairs in the cabinet, who is still in her acting capacity. headed by Johnson. However, Truss is able to turn the situation inside out, demonstrating both the loyalty to the leadership, beloved in the conservative environment (she supported him throughout all the scandals), and loyalty to her professional duty (unlike many members of the Cabinet, she did not resign because she coordinated London's reaction to the Ukrainian conflict). ).

Sounded at the time (even before her appointment as Foreign Minister) to Truss and criticism that she was interested not so much in work as in her own reputation, hinting at her activity in social networks .

In general, detractors might charge Truss with excessive political inconsistency. At one time she voted for the UK to remain in the European Union, but after the 2016 referendum she became a supporter of Brexit.

And if you delve into the biography of a politician, you can remember that as a child she participated with leftist parents in pacifist demonstrations demanding the resignation of Margaret Thatcher, then she was an activist of the Liberal Democratic Party and advocated the abolition of the monarchy in Britain, and now she wants to become the face of the Conservative parties in the image of “Thatcher 2.0”. But again, such somersaults can be “turned into a feat”, explained by this natural evolution of views.

Imitation of the “iron lady” (after all, even the famous helmeted photo on a tank in Estonia is a “reproduction” of Thatcher's Cold War photos) bears fruit Liz Truss. Her enthusiasm for defending freedom, free trade, low taxes and a little government intervention resonates with the conservative masses.

But to be like the most famous woman in British politics, the desire is not enough. “Will the people want an ersatz Thatcher in the next election?” – asks a former Conservative cabinet minister.

And, as the Financial Times notes, Truss's hardline economic stance and aversion to political correctness make her a divisive figure. While many see her as a thought-provoking and relentlessly energetic minister, “an equal number, perhaps more, see the foreign minister as some sort of political joke.”

And we are not even talking about geographic news coming out of the mouth of Liz Truss, such as the assignment of the Voronezh and Rostov regions to Ukraine. One former British ambassador who listened to the head of the Foreign Office's foreign policy keynote speech last year, in which Truss spoke of rebuilding “muscles” “global Britain”, reacted ruthlessly: “This is the biggest nonsense I have ever heard.” “She is very charming, she has a sense of humor, she is quick-witted, – says one experienced British diplomat. – Personal style matters in foreign policy, especially in the first meetings.

But the charm – this is not the weapon that Truss uses in the Russian direction. The Ukrainian crisis has become an opportunity for her to build an image for herself as the leader of Western efforts to confront Russia. And she nurtures the “Manichaean” a view of the world in which, in her opinion, democracies should stand against authoritarian regimes (which the head of the British Foreign Office, of course, includes China and Russia. So if she comes to 10 Downing Street, there will be no thaw in relations between London and Moscow There's obviously no need to wait.

A lot has been said in the past about some of Boris Johnson's oddities, but it's possible that if Liz Truss wins, the tradition will continue. ;She's a very strange person, — says a Conservative MP who knows Liz Truss well – Not good or bad – just very weird».

Boris Johnson said goodbye to Parliament with a phrase from ” Terminator”: video