“You can't play by the rules of Kyiv”

Ukrainian troops are shelling Donetsk and the surrounding cities like it's the last time. “We didn’t have this even in 2015,” say residents of the central districts of the capital of the DPR. Previously, shells flew to the outskirts of the city or to militarily significant places. Now the city is covered with dense fire, focusing on social facilities and residential buildings. Why did the Ukrainian troops and their command need this, MK understood. 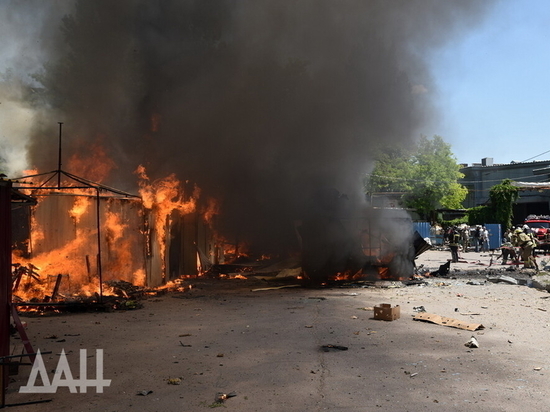 On June 13, Ukrainian artillery bombarded the city for six hours, targeting the most important places for ordinary people – a church, a market, a hospital, a maternity hospital. It seems that from the other side they are simply eager for an answer: they can’t wait until Avdiivka, from where the shelling is being carried out, will be smashed to pieces.

More than 300 shells from Uragans, Grads and foreign artillery pieces were fired at Donetsk on Monday. And on Tuesday morning, the blow also hit Russia, where the target was the city of Klintsy in the Bryansk region, located not far from the Ukrainian-Russian border.

Residents of the quiet village of Zaimishche on the outskirts of Klintsy woke up from strong explosions, there was a column of smoke in the air, and a large shell crater on the ground. According to eyewitnesses, a Mi-28N Night Hunter helicopter was seen flying at low altitude in the sky. “It hit a military unit and a residential building,” local residents say, “glasses flew out near the houses nearby.”

There are reports of casualties – four people were injured, who are now in traumatology. The initial information that one woman lost her leg was not confirmed: “She has shrapnel wounds. This woman went outside to fetch water. A piece of shrapnel hit her house, and she was standing nearby,” local residents say. The shelling was carried out, probably by the Ukrainian Tochka-U. As a result of the incident, the city had partial problems with water and electricity

In Donetsk, Voroshilovsky, Budyonnovsky, Kyiv and other areas of the city suffered from shelling. The Armed Forces of Ukraine did not spare even babies: in the center of the city, the Vishnevsky maternity hospital came under fire. There was only serious damage to the building – a shell broke through the roof, destroyed windows and walls. Patients and staff miraculously survived, having managed to take refuge in a bomb shelter. Now women in labor have been transferred to other places, and the maternity hospital is temporarily closed.

Many residential buildings are destroyed or damaged, and an unexploded ordnance is reportedly lying on the floor of one of them.

“The enemy has literally crossed all boundaries,” said the head of the DPR, Denis Pushilin, “forbidden methods are being used, sleeping areas, the central districts of the city of Donetsk are being shelled. Other cities and regions of the Donetsk People's Republic are also under fire.”

They also aimed at the saint – they struck from the “Hurricane” at St. Vladimir's Church in the Kuibyshevsky district of Donetsk. The shell did not explode, only slightly damaging the roof and a nearby car. As a result of yesterday's shelling, there were many wounded and dead, among the victims there are minor children.

According to experts, there is no logic in the shelling of peaceful targets, the goal of the Armed Forces of Ukraine is to piss off the command and provoke the forces of the RF Armed Forces and the people’s militia of the DPR to attack “head on” and reach Ukrainian artillery. This opinion is shared, for example, by DPR Deputy Information Minister Daniil Bezsonov “The population is dissatisfied with the shelling and criticizes the authorities. Our military, under the pressure of public sentiment, remove our artillery and our units in the Popasnyansky and Limanovsky directions and transfer them near Avdiivka, where the Ukrainians “extinguish” them during a frontal attack on their positions,” Bezsonov outlined the Ukrainian plan.

The historian and military expert Yuri Knutov expressed the same opinion. He believes that the main reason for the shelling is to arouse dissatisfaction with the inhabitants, so that the authorities at any cost try to move the front from Avdiivka, where the Armed Forces of Ukraine have equipped strong fortifications: “Avdiivka is powerfully fortified, troops seem to be advancing in Maryinka, but there are certain difficulties. Accordingly, it is necessary to strengthen the grouping, and strengthening the grouping is possible only by relieving pressure on Severodonetsk/Lysichansk and Slavyansk/Kramatorsk. And because of these fortifications, a frontal attack on Avdiivka will lead to colossal losses on our part. The whole calculation is based on this, for the sake of this, these shellings are carried out.”

What can be done? Do not play according to the scenario that the Kyiv regime is trying to impose.

It is impossible to equalize the positions of the Armed Forces of Ukraine, together with Avdiivka itself, with the ground, since a large number of civilians remain in residential development, and a large chemical enterprise, the Avdiivka Coke and Chemical Plant, is located nearby.

DPR official representative Eduard Basurin believes that this the shelling of the Armed Forces of Ukraine was prepared for a long time, since coordination takes time. “The shooting was not just chaotic,” he told media representatives, “the shooting was carried out on a certain square, which suffered the most, this is our Voroshilovsky, Kyiv and Kuibyshevsky districts. At the same time, the enemy constantly changed the positions of artillery, covering one another, and all the time the shooting was exactly on the square – this is the destruction of the civilian population. “

According to Basurin, more civilians die in Donetsk than the military – this is how Ukraine shows “love” for citizens whom it still considers its own.< /p>

In connection with the current situation, Denis Pushilin turned to Russia with a request to attract additional allied forces: “An understanding was reached that all the necessary additional forces of the allied forces, primarily the Russian Federation, will be involved,” he said. .