A Balkan volunteer told why he is fighting for the DPR

The more time you spend in Donbas, the more you realize how many interesting people who are not indifferent to its fate are attracted to this region. A few days ago, I had the opportunity to meet a native of the Congo, who is participating in a special military operation in the ranks of the Chechen unit “Akhmat”. And here is a new acquaintance. Platoon commander of the infantry battalion of the operational group “Delta” of the People's Militia of the LPR with the call sign “Serb”. 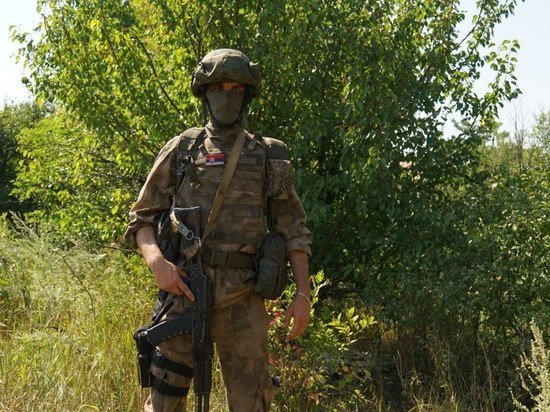 As you might guess, the call sign of the serviceman was not chosen by chance. The man is indeed from Serbia. At the end of 2014, he came as a volunteer to the Donbass and after eight years, as the military himself admits, this land and its people became dear to him.

When asked why a citizen of another country suddenly had a desire to stand on defense of Donbass, “Serb” answers what motivated him first of all by the desire to help the Slav brothers:

– Here in 2014 there was not just a civil war, it was a clash of two large countries. And one of them, I'm talking about Ukraine now, just started killing defenseless people…

According to the “Serb”, he already saw everything that was happening in the Donbass in his country in 1999, when people sat under carpet bombing for 90 days.

– The United States and NATO countries killed our children, women, old people. It shouldn’t be like this.

It was this parallel with the suffering experienced from one’s own experience that became the key moment for making a decision, perhaps strange in the eyes of others, the interlocutor shares.

The Serb admits that he had no military training, let alone combat experience, until 2014.

– I didn't even know how to assemble or disassemble a machine gun. I learned everything here when I came. The mentors were good, real experts. Thanks to them.

– My military path began with Debaltseve, then served and settled in the Luhansk People's Republic. During the special operation, he took part in the assault on the city of Svetlodarsk, where our troops broke through the enemy's defenses. Unfortunately, then we lost the battalion commander and the company commander. They came under fire from the Ukrainian armed forces. It was a huge loss, but we still reached Svetlodarsk.

According to the interlocutor, it was the most difficult battle since the start of the special operation.

He says that if we compare the enemy, who was eight years ago, and the one that is now, the difference is visible to the naked eye.

– They began to work very smoothly. This has never happened before.

– Recently, our unit has liberated the Uglegorsk TPP, we are moving forward according to plan.

The assault on the thermal power plant, according to “Serb”, was indeed a very difficult task. The fortifications, pillboxes and dugouts, equipped by the Ukrainian military, were filled with concrete and practically looked like an impregnable fortress.

– But we have excellent artillery, – the military man says not without pride. – The guys worked very professionally. About two thousand shells were fired at the approaches to the station.

According to the “Serb”, if it were not for the support of artillery, the assault on the TPP could hardly have been successful. And most likely, it would have dragged on for a long time.

– The enemy artillery worked without interruption. We would not have been able to simply enter the open field with all our desire.

According to the serviceman, the TPP was a very significant strategic point. After all, it can “power up” the entire Donbass with electricity.

– No. My home is here. During this time, I have already become a citizen of the Russian Federation, and I am going to stay in the Donbass.