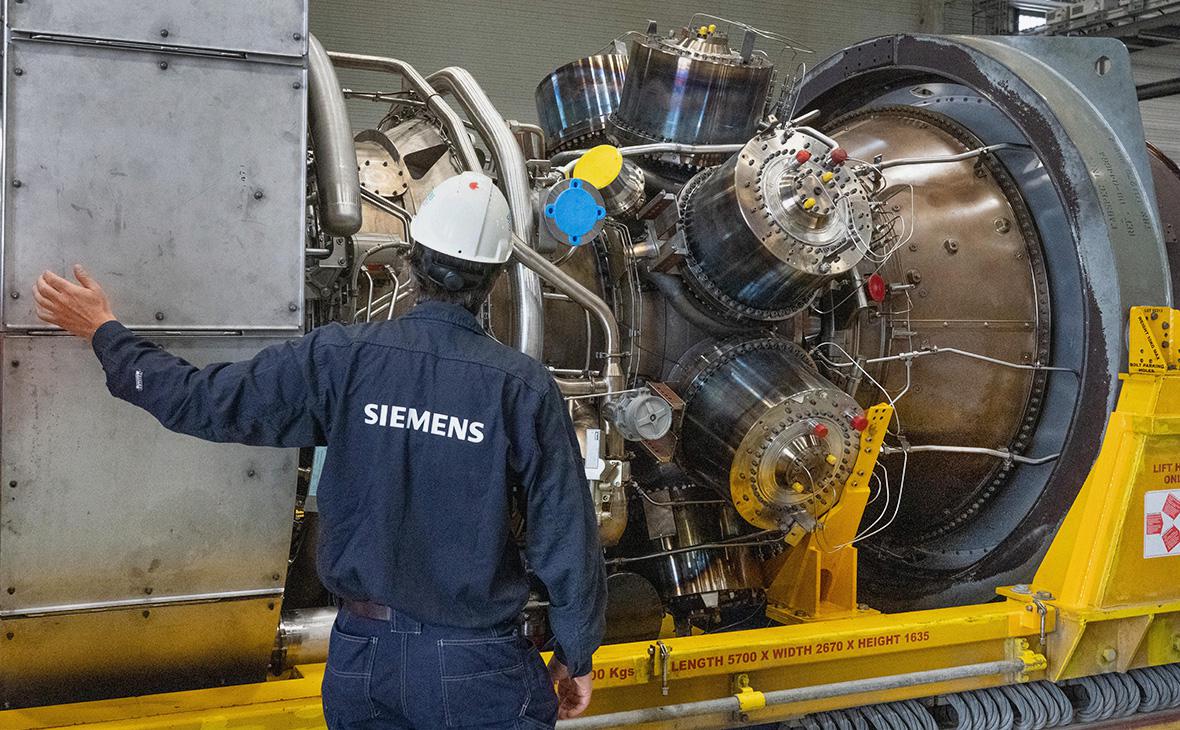 < p>Turbine for the Nord Stream gas pipeline located in Germany, the statements of “Gazprom” about problems with its transportation to Russia due to restrictions from the EU, Canada and the UK are not reliable, a representative of Siemens Energy told RBC.

“Everything that could be said about this has been said, yesterday even the German Chancellor was there and spoke, there is nothing more to say. <…> There are no sanctions on the turbine in the EU, it's just not true,— he said.

The Russian side, on a daily basis, names “some other reasons” because of which the turbine cannot be accepted by Gazprom, emphasized Siemens Energy. The company indicated that if Russia really wanted to receive the equipment, it would have already happened.

RBC sent a request to a representative of Gazprom.

The day before, on August 3, German Chancellor Olaf Scholz, together with the head of Siemens Energy, Christian Bruch, visited the plant in Mülheim an der Ruhr, where the Nord Stream turbine is located. The latter pointed out that for transportation to Russia, the desire and participation of Gazprom is necessary, while this is not the case. Bruch noted that the company is “highly interested” in in the transfer of the turbine.

Scholz confirmed that the turbine can be transported without any problems at any time, this requires only the participation of the Russian side. According to him, Gazprom must provide the necessary information for customs clearance, all other permissions are available: from Germany, the European Union, the UK and Canada.

Read on RBC Pro Pro Business was allowed to receive loans in exchange for tokens. Why it's important Articles Pro “After 50/45/35 years there can be no career”: what top managers are afraid of Articles Pro Metallurgists suffer losses due to sanctions. What awaits Russian companies Articles Pro Six months left: what you need to know now about electronic powers of attorney Instructions Pro “I wake up while the world is sleeping”: why the former head of Disney gets up at 4.15 am How To Billionaire Prodigy: How Austin Russell Made His First $1 Billion At 25 Pro Articles Why Selling Netflix Is Only A Matter Of Time Articles

“She is here. She's ready to go. And by the way, in the world we live in today, it is very easy to transport it. All you have to do is say, “Please send her,” — stressed the German Chancellor.

However, the same evening at Gazprom announced the impossibility of transporting the turbine to Russia due to the “sanction regimes of Canada, the EU, the UK”; and non-compliance of Siemens Energy with contractual obligations.

According to Reuters, Canada shipped the turbine to Cologne about three weeks ago— July 17, but she got stuck in Germany, because Moscow did not issue an official permit for her import.

This data was rejected in the Kremlin, calling it “complete stupidity.” “Siemens knows exactly where this turbine is installed. That is, this is just an absurd message from the sources,»,— Russian presidential spokesman Dmitry Peskov said. He recalled the words of Vladimir Putin, who said that Russia itself has not yet received the necessary legal and technical documentation for the import of equipment for Nord Stream. “We must understand that Gazprom” takes what condition the car came in and what is its legal status: is it under sanctions, not under sanctions? What to do with her? Tomorrow, maybe they will pick her up,— said the president.

The turbine was under repair in Canada, after which its export was difficult due to sanctions against Russia. After a request from Germany, the Canadian authorities agreed to send the equipment, which drew criticism from Ukraine. President Volodymyr Zelensky called the decision a “dangerous concession.” At the same time, Scholz considered that Canada revealed the “Kremlin's bluff”, depriving Russia of a reason to cut gas supplies.

The absence of a turbine in Gazprom explained the reduction in gas supplies to Germany via Nord Stream. First, fuel pumping fell from 167 million to 100 million cubic meters. m of gas per day, then another third. “Gazprom” also suspended pumping for two weeks due to preventive maintenance, resuming it in the same volume as before maintenance. At the end of July, gas pumping decreased to 35 million cubic meters. m per day, which amounted to 20% of the design capacity of the gas pipeline.

The German authorities and Siemens Energy management consider political motives, not technical conditions, to be the reasons for this trend. “Even if it were, it would never justify such a large reduction in gas flow,” — said the chief executive of Siemens Energy, Joe Kaeser. Berlin assumed that the shortage of gas threatened to suspend all market processes in Germany, which would be a disaster for the country. The Russian authorities have denied these accusations.

According to Bloomberg, Moscow intends to keep gas supplies to Europe at a minimum level to increase pressure in response to sanctions.