Our correspondent visited the site

Armed formations of Ukraine continue to fire artillery at the residential sector of the Luhansk People's Republic. Yesterday, the Armed Forces of Ukraine attacked two settlements at once – the city of Irmino and the village of Good in the Slavyanoserbsky district. The city of Irmino came under shelling at about 4 am, when the inhabitants were sleeping peacefully. The Ukrainian side struck with the use of multiple launch rocket systems “Hurricane”. The MK correspondent visited the site of the shelling and met with the residents.

– In this case, a rocket with a cluster warhead was used, – explains Alexei Getmansky, representative of the People's Militia of the LPR in the joint control center.

The rocket landed on the territory of a tuberculosis dispensary. Fortunately, there were no people nearby in the early morning. However, the cassettes of the reactive system damaged the building of the Stakhanovskoe bone-tuberculosis sanatorium, located nearby.

The head doctor of the sanatorium, Lyudmila Kolesnikova, showing the damage on the facade, says that at the time of the shelling, patients and medical staff were in the building.

– When they heard the roar, those who could move independently immediately went outside. However, we also have bedridden patients, they just had to be covered with pillows. During the night shift, one nurse and one nurse remain in the sanatorium, they physically could not bear the people.

In addition to medical institutions, private houses were damaged in the city.

– It has become scary to live lately, – Laundry workers Natalya and Elena tell. – They shoot at any time of the day.

According to the women, from the moment the special operation began, people breathed a sigh of relief for a while. The Armed Forces of Ukraine have almost stopped their ruthless terror, but in the last month the situation has worsened again.

Interlocutors We are convinced that Ukraine has toughened the fire out of desperation.

– They understand that they will not be able to change anything. So they wipe us off the face of the earth. 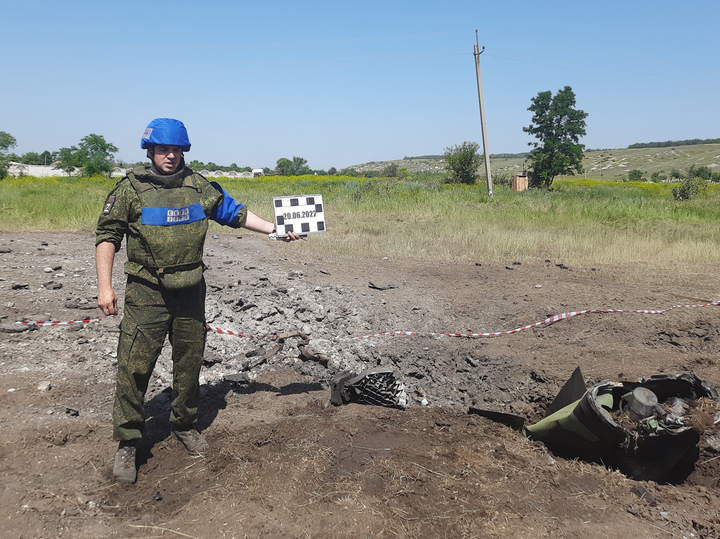 After listening to the aspirations of the locals, we advance to the next firing point in the village of Good. There is already “arrival” more serious. The Armed Forces of Ukraine hit civilians from the Tochka-U tactical missile system. The rocket arrived at 18:00 and landed near the cultural center. At that time, there was a large crowd of people on the square, children were playing. Thanks to a lucky chance, none of them were hurt.

The area where the rocket body rests is surrounded by a stop tape. Scattered parts are scattered everywhere in the district. Despite the fact that its deadly mission “Point” already done, people still cautiously bypass it.

An employee of a grocery store affected by the arrival of a rocket says that her colleague miraculously survived. A fragment pierced through the building at the very time when the woman released the goods to the buyers.

– Thank God, the fragment ricocheted off the pipe and changed its trajectory, otherwise we would have gathered today for a different reason.

Besides the store, 9 residential buildings, a school and a kindergarten were damaged in the village from the arrival of the rocket.< /p>

– We were standing on the street when the rocket arrived. We heard a strong whistle, thought that the plane was falling. Then an explosion, fragments flew, smoke everywhere. Even the chandelier fell at my house.

Once again, it is worth noting that the armed forces of Ukraine strikes at settlements where there are no military installations. And those who give criminal orders cannot but realize that peaceful, defenseless people become their victims.