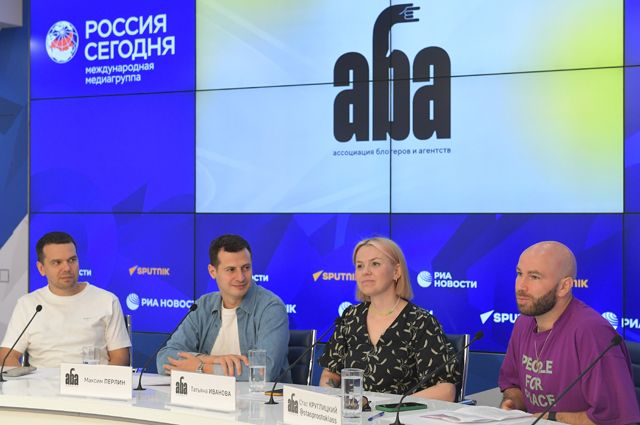 Members of the Association of Bloggers and Agencies (ABA) — leading domestic production and creative agencies that supervise Russian-speaking bloggers with a large audience. The main goals that the ABA has set for itself today are: ensuring an effective dialogue with the government, developing the industry, combating market monopolization, recognizing blogging as a profession by the state, and equating Internet marketing with IT companies. The representatives of the blogosphere and the founders of the Association discussed the implementation of these tasks at a press conference held at the international multimedia press center “Russia Today”.

“According to unofficial data, last year the total turnover of Internet marketing amounted to 15 billion rubles. At the same time, our market has never been united by any association, unlike, for example, the Association of Creative Agencies. Her creation was completely situational. We arranged several anti-crisis meetings to understand what to do next. Then the idea arose to form an association, », — ABA President Tatiana Ivanova began her speech.

ABA Co-Founder Maxim Perlinnoted that the influencer marketing industry, where bloggers and celebrities with a large audience on social networks and on other platforms are the main opinion leaders, has fully shown its scale and significance during the pandemic. According to him, at that time the figures for the coverage of media people in our country approached those of TV channels, and in terms of prompt response to news, bloggers completely outstripped them.

“In the plans of the ABA — create a black list of unscrupulous bloggers. This is necessary to develop rules for ethical behavior. The system will be similar to football: we will introduce yellow and red cards. If the agency proves that the blogger behaved ugly, then he will first receive one warning in the form of a yellow card. In total, you can “accumulate” three. Then the media person is marked with a red card. This means that the members of the association who verified the rule will stop cooperating with it, — Perlin explained.

One of the main idols of the youth — blogger Stas Kruglitsky. He became famous thanks to funny short videos on social networks, where he plays the role of a capricious girl named Santana Novikova. The creation of the Association of Bloggers and Agencies, according to Kruglitsky, is a necessary solution that will make the blogosphere more honest, safer and more successful.

“Due to the recognition of some social networks as extremist in Russia, my income this year has fallen by 90%. But I am sure that the sphere will soon recover, domestic analogues of social networks will appear, where the audience will come. And this will be useful to the state, including due to tax payments by bloggers. The association will certainly influence the improvement of influencer marketing, — he said.

Yaroslav Andreev, founder of Dream Team tik-tok-houseagreed with the opinion of Stas Kruglitsky. He also noted that in the spring the industry sank due to the fall in the audience and the departure of global brands for one reason or another. According to Andreev, now representatives of the sphere are living in a crisis management situation and are actively looking for new ways to grow the blogging industry market.

“People are accustomed to consuming information through bloggers. I am sure that new social networks will be launched in Russia, where we will succeed. While the market is in a state of stagnation, but in a year or two everything will begin to develop again, and the association will help with this, — he said.

Television and radio host Tutta Larsen agreed that the ABA would have a positive impact on the development of the blogging industry. She considers its infinity and freedom to be the main advantages of the sphere: people of different professions, age and social status become bloggers.

«Blogosphere — it is, first of all, a unique degree of closeness to the audience. Many bloggers — people who studied for something else, but thanks to social networks they received a tool to develop their profession. From a hobby or a game, blogging has grown into a full-fledged profession that needs to be recognized. It forms the image of the country, », — she concluded.